Sleeping in the Crib 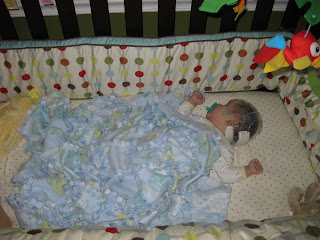 Monday night we started putting Santiago in the crib at night to sleep. He is too big for the bassinet in our bedroom. It was time to let him try sleeping alone in his cute room. For the last three nights, Santiago has gone to bed around 9 pm and he sleeps solid until about 4 am. I can hear him on the monitor making noises and beginning to cry around 4 so I get up and go into his room. I give him his pacifier and he will go back to sleep. That's when I go back to my bed but then Santi wakes me up again anywhere from 30 minutes to an hour later. When I go in the second and sometimes third time and the pacifier doesn't work, I have been picking him up and taking him to bed with me. He then will fall asleep with us in the bed and sleep until 7 am. I don't have to feed him or anything in the middle of the night so I feel like he is doing really well. Eventually I hope he will sleep the entire night without any interruptions in his own crib. But for now, Hector and I both love waking up with him between us. When Santiago wakes up, he is all smiles and wiggling! He is adorable in the mornings.

In addition to sleeping at night in his crib, Santiago has been sleeping in it for his first nap of the day. Yesterday I was thrilled that when Santi was getting sleepy, I just laid him in his crib and covered him up with the blue blanket and he fell asleep. He did it again this morning! That is a wonderful accomplishment for both of us that I do not have to hold him or rock him to sleep. Hopefully he will start doing this for other nap times as well.

The blanket that is covering him in the picture is from my mom's dear friend Bonnie. He absolutely LOVES this blanket. When you wrap him up in it, he automatically gets sleepy. I think it is going to be his favorite for a long time!

Blogs I love to read