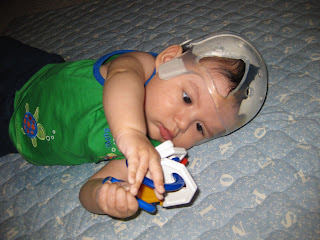 Today it almost happened. Santiago ALMOST rolled from his back to his tummy. He is really good at lifting his legs in the air and then rolling to the side and today he decided that he wanted to reach for a toy that was laying beside him and he kept almost flipping over. We had to go to Dynamics again today for another helmet adjustment and I had him laying on the patient table and he rolled from his back to his side and then to his tummy but his arm was caught under him and I was scared that he may fall off the skinny table even though I was sitting right beside him so I quickly flipped him back over to his back. Then when we got back home, he did the same thing on the blanket on the floor where he was laying . So I guess we can say he flipped over twice today if you count having an arm stuck underneath! I guess he will figure out how to pull his arm out and then he will be laying completely on his tummy. 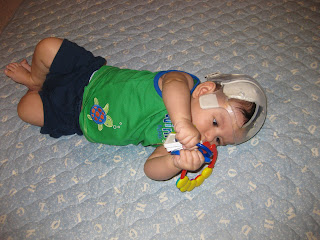 Lately Santiago has begun enjoying his tummy time more also. Before he would either start to fuss when you laid him on his tummy or he would just lay there all content and now he pushes up on his arms and holds his head high and smiles! 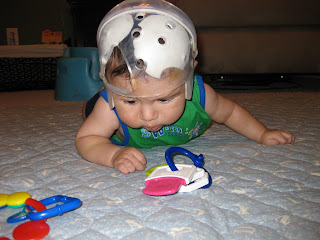 Another cool thing that Santiago has been doing pretty much every night in his crib this last week is turning his entire body around. I lay him with his head under his mobile and when he wakes up in the morning his feet are usually under the mobile and his head is pointing the other direction. He is like a little clock in his bed and it doesn't even wake him up. It amazes me to see him in a different place and different position every time he wakes up.
Posted by Katie at 10:28 PM

Blogs I love to read